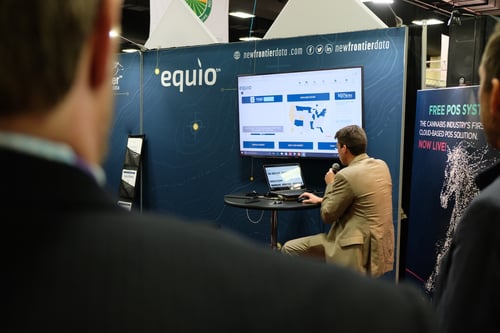 Yet for all the similarities, the events had their unique flavors, too: In California, the well-established, relaxed cannabis culture is poised to open an adult use market that will be the country’s largest cannabis market by far; and in New York, with its East Coast establishment, more conservative button-down sensibilities, looking to exploit investment opportunities amid a burgeoning, disruptive industry. Think of the comparison between the two like Jim Cramer of “Mad Money” joining the cast of the millennial “Dharma and Greg” sitcom (see: YouTube).

Of course, a certain maturation of the events were to be expected after last December, when the New York Stock Exchange (NYSE) listed its first cannabis-focused company with the IPO of Innovative Properties (IIPR:NYSE), noted in New Frontier Data’s “The Cannabis Industry Annual Report: 2017 Legal Marijuana Outlook” (available here), as “just one more signal that major trading markets in the U.S. are warming up to cannabis securities.”

Of course, the events’ keynote speakers themselves illustrated the variations of themes. In Oakland, Vicente Fox – former president of Mexico and president of Coca-Cola Latin America – alternately promoted including cannabis in the North American Free Trade Agreement (NAFTA) and disparaged the Trump administration’s policies for being unclear or hostile about cannabis. Then in Manhattan, Roger Stone – longtime Republican strategist and himself a Trump administration adviser – announced formation of the bipartisan United States Cannabis Coalition (USCC) as a lobbying organization aiming to protect states which have legalized cannabis, remove marijuana from its Schedule I federal drug status, and encourage funding for unbiased research into the potential benefits of cannabis products.

It was the latter speaker’s presentation which caught the attention and stoked the enthusiasm of Leslie Bocskor:  founder and president of Electrum Partners, an advisory consulting firm specializing in medical and adult use cannabis and ancillary businesses in the industry.

“Roger Stone is the most important news out of [CWCBE], in my opinion,” Bocskor said. “Especially so, in that certainly [Attorney General Jeff] Sessions has been challenging for the industry. If Roger Stone can help redirect focus onto the black market rather than on the activities and efforts of any good actors in the regulated market, that would be very helpful. Now is the time to stop the bootleggers” amid the illicit market.

Conversely, Bocskor said, “the Oakland event was really more about business development, so nothing specific from that event jumped out at me (though) a lot of people attended for the first time, and were arriving from many different sectors and industries – investing, publishing, marketing, even pharmaceuticals and nutra-pharmaceuticals. These were senior-level executives, not just curious but seriously engaged. I met someone with a patent on extracting the active ingredients from opium poppies by the ton. Seeing these people come into the industry and raise the bar on practices, activities, and levels of discussion was great.”

Traditionally, the NYC event has been more lightly attended, Bocskor said, so the turnout there also demonstrated how interest in the industry has been growing. “It proved that the New York show is now transitioning into a real industry event, so that was very good to see as well,” he concluded.