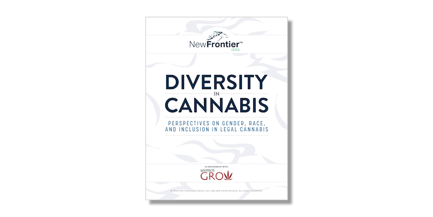 We live in uncertain times. Yet, New Frontier Data is a data analysis and research firm which routinely informs the industry, policymakers and the media about vetted trends and market dynamics. This summer, New Frontier Data, in conjunction with Women Grow, jointly undertook to produce a first-in-the-industry survey and report about the state of diversity within the burgeoning cannabis industry. The results are detailed in our Diversity in Cannabis Report, now available for presale.

New Frontier Data and Women Grow, respectively founded in 2014 as women-directed and operated companies, understood what the research could provide to the marketplace. As explained by New Frontier Data CEO Giadha Aguirre De Carcer, the diversity survey received input from 1,741 self-selecting participants, both women and men, who either worked in the industry or were expecting to enter it.

Broken down, women- and minority-owned firms remain a small segment among all U.S. businesses, yet the cannabis industry can boast of higher numbers of women in positions of leadership. The 2012 U.S. Census Survey of Business Owners reported that women-owned businesses had increased to 36% from 29% five years earlier.

Recently, a spate of explosive sexual harassment scandals has brought the workplace issue to national attention like perhaps nothing since the Senate confirmation hearings of Supreme Court Justice Clarence Thomas to the bench 26 years ago this month.

The cannabis industry is itself not immune, and has seen recent allegations of its own. Yet, results of the survey strongly suggest that the levels of women’s involvement and responsibility through roles of industry leadership demonstrably make a difference.

In October 1991, law professor Anita Hill testified before the Senate Judiciary committee
about allegations of sexual harassment from some eight years earlier while working for Clarence Thomas, who had then been nominated by President George H.W. Bush to serve as an associate justice on the Supreme Court.

At that time, the testimony presented via national television over three days’ discussion of Hill’s allegations was described by Newsweek magazine as “an X-rated spectacle that was repulsive and irresistible at the same time.” Turn ahead now to 2017 -- since the advent of social media, and with a string of high-profile, million-dollar legal settlements – such irresistibility is borne not by one notorious story, but by a continuous barrage of incidents, accusations, and responses.

In the summer of 2016, Fox News CEO Roger Ailes was accused by network anchor Gretchen Carlson; by that fall, more allegations against Ailes soon included accusations of sexual harassment by Fox broadcaster Bill O’Reilly. In November 2016, a New York Times investigation revealed that since 2002 five women had been paid settlements from O’Reilly, Fox News or parent company 21st Century Fox

This month, the New York Times reported a $32 million settlement by O’Reilly to another former Fox News colleague who claimed harassment, and exclusive exposes in the Times and New Yorker magazine detailed incidents and accusations against Hollywood movie mogul Harvey Weinstein, against whom now more than 50 women have come publicly forward.

In 1991, Hill’s testimony set off a greater national understanding of sexual harassment looks like in the workplace, pushing employers to institute educational programs on the subject. According to the Washington Post, federal reports of sexual harassment to the Equal Employment Opportunity Commission (ironically, the very agency where Hill and Thomas had worked together) included 6,126 claims the year before Hill testified, and 10,578 the year afterward (a comparative increase of 72.7%). Human resources departments nationwide regularly implemented mandatory workforce training as a hedge against professional negligence.

The Diversity in Cannabis Report discusses issues about sexual harassment (including or extending into experiences with gender and racial discrimination), but that is a small component to the much larger, comprehensive look at topics including diversity within upper management, cannabis usage, compensation and benefits, diversity and inclusion in business strategy, diversity and performance, and other important industry issues.

In a recent poll conducted by the Washington Post and ABC News, 64% of Americans reported feeling that sexual harassment in the workplace was a serious problem. By comparison, our diversity survey found that 33% of respondents reporting that someone they knew had personally experienced sexual harassment in the cannabis industry. When filtered to include only women who worked in non-ownership or management positions, that figure jumped to 49%.

The Diversity in Cannabis Report details how 74% of survey respondents recognized a need for greater sexual and racial diversity in the industry, but that less than 1/3 of businesses had adopted policies to ensure the recruitment and retention of a diverse workforce. To the extent that perceptions and practices can be more closely reconciled, the better off that the industry as a whole will be as it matures.

Such findings are indicative of the broader aims for the report, as described in the executive summary: “As consumer research around cannabis has grown, the industry has begun to better understand the unique drivers of consumption and product preferences across consumers subgroups. Understanding these behavioral differences and tailoring the development and marketing of cannabis products to each group’s unique behaviors can offer businesses in the industry an opportunity to both differentiate their brand in an increasingly crowded market, as well as build customer loyalty within specific communities of cannabis consumers.”