Rohrabacher-Blumenauer: What Are The Stakes - Revisited 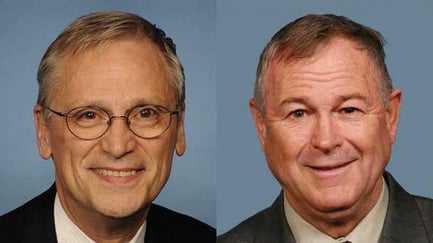 In what has become a de facto annual event on Capitol Hill (where a version was first proposed in 2001, finally passed in 2014, and renewed each fiscal year since), the Rohrabacher-Blumenauer amendment was again blowing in the wind for the past week amid all the talk about a shutdown of the federal government.

The amendment provision prohibits the Department of Justice (including the DEA and the FBI) from using any federal funds toward the prosecution or arrest of anyone who abides by state laws and regulations in states with legalized medical cannabis programs. Yet, as presented as part of a budget appropriations bill, its fate depends on that bill.

Yet, as presented as part of a budget appropriations bill, its fate depends on that bill. When the budget expired on Friday night, so did the amendment: As of Sunday morning, the government was in shutdown with lawmakers returning to Capitol Hill to find some agreement, if only a stopgap. Meanwhile, the protections have also expired for now, though should the bill eventually be renewed they will apply retroactively. The protections took on a renewed degree of controversy after Attorney General Jeff Sessions last May wrote a letter to Congressional leaders specifically requesting that they end the medical cannabis protections. “The Department,” he wrote, “must be in a position to use all laws available to combat the transnational drug organizations and dangerous drug traffickers who threaten American lives.”

Meanwhile, Americans themselves support legalized cannabis in record numbers, according to recent polls. According to Gallup, 64% of Americans overall are in favor, along with 51% of Republicans. Likewise, the Pew Research Center found that 61% of U.S. adults support legalization, nearly double the percentage favoring it in 2000. Among GOP-leaning voters younger than 40, support is at 62%.

“Even – or especially -- in light of Sessions’ comments and effective rescission, we anticipate that Rohrabacher-Blumenauer will be renewed,” explained Garrett Graff, an associate attorney for Denver-based Hoban Law Group. He added that if its renewal failed, a backlash of political response would be swift.

“Lawmakers across the country are being galvanized,” he noted. “Rohrabacher-Blumenauer only protects medical cannabis, but Sen. Cory Gardner (R-Colo.) and others have been galvanized to renew and expand it with respect to protecting legalization in states where cannabis is lawful. While it remains to be seen whether that is written in [Friday] or down the line, we think that will lead to protection.”

Graff noted that were Rohrabacher-Blumenauer removed from the continuing resolution, the federal government would be allowed to dedicate funds to prosecute cannabis stakeholders, but “we would expect the same [prosecutorial] discretion to be applied by U.S. attorneys nationwide.”

Already this month in Colorado, Acting U.S. Attorney Bob Troyer (in line for a permanent nomination from Sessions) and State Attorney General Cynthia Coffman (a Republican gubernatorial candidate) have both expressed their laissez-faire intentions toward legal cannabis businesses. Troyer insisted that his attention remains “identifying and prosecuting those who create the greatest safety threats to our communities around the state.”

Indeed, lawmakers of both major parties are pledging their support for legal cannabis businesses. Sen. Elizabeth Warren (D-Mass.) took to social media last week to voice opposition to Sessions’ intentions to enforce federal marijuana laws, writing via Facebook and Twitter that cannabis policy should be left up to the states. She also promised to propose in coming weeks some protective legislation for state-legalized cannabis companies.

“All I can say,” Graff concluded, “is that I would urge operators and owners to continue operating as they have been for the past several years. It may have [short-term] impact on fundraising and investing, but not policy on the ground.”