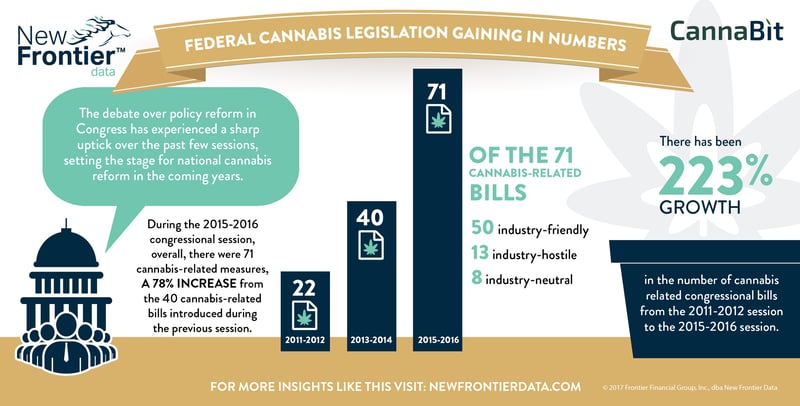 After a week in which U.S. Attorney General Jeff Sessions acknowledged the validity of the Cole memo, it seems a worthwhile time to review where things stand on the national policy front.

On three occasions last week, Sessions expressed his personal opposition to legalization, and even his skepticism for medical use (despite recent studies and discoveries of benefits) as “hyped maybe too much.” But during a Wednesday press conference, he pragmatically ceded to reporters that “essentially we’re not able to go into a state and pick up the work that police and sheriffs have been doing for decades.”

That, for the time being, suggests the Justice Department’s maintenance of the laissez faire status quo in states with legalized programs, a welcome affirmation for the cannabis industry at large.

Nevertheless, uncertainty about investment and growth will linger in the air until the federal government passes more definitive policy and regulations for both medical cannabis and adult use programs. Toward that end, the legislative momentum from Capitol Hill seems definitively tipped toward reform.

The last congressional session (2015-2016) marked the fourth-straight annual increase in cannabis-related bills, up 78% from the previous Congress and an uptick of 223% overall from the 2011-2012 session.

In classifying the 71 bills introduced in 2015 -‘16, New Frontier Datafound 50 (or 70.4%) of them to be industry-friendly, a number coincidentally mirrored last month in a Quinnipiac University poll by the percentage of American voters (71%) opposed to enforcing federal law in states with legalized cannabis.

The debate over policy reform in Congress has experienced a sharp uptick over the past few sessions, setting the stage for national cannabis reform in the coming years.

The four bills which have been presented on the Hill so far in 2017 include:

As Justin Strekal, political director for the National Organization for the Reform of Marijuana Laws (NORML) told New Frontier Data reporter Eric Schwartz on Friday, "The two bills we like most are H.R. 975 from Representative Dana Rohrabacher, a Republican in Southern California, which would defund the ability of the federal government to enforce federal marijuana laws in states where it is regulated, aka as it is called, the Respect State Marijuana Laws Act."

He added that "the second bill we are very encouraged to see is H.R. 1227 from Virginia Representative Thomas Garrett. It's basically the same bill that Senator Bernie Sanders introduced last year; it simply removes marijuana from the controlled substances list."

NORML’s excitement about actual passage of the bills is tempered, however. “Everyone knows we have a very dysfunctional Congress right now,” Strekal reminded, though “we are encouraged by the new members that won't just vote the right way, but put their names on the bills."

He described the Polis-McClintock amendment, from representatives Jared Polis (D-CO) and Tom McClintock (R-CA), as the likeliest to pass into law. Last time (in 2015) it failed narrowly, 206 to 218, but Strekal had “every confidence” that it would pass now if called for a vote.

The Polis-McClintock amendment would provide the same protection for adult use markets that the Rohrabacher amendment does for medical use programs, and likewise need annual reauthorization."