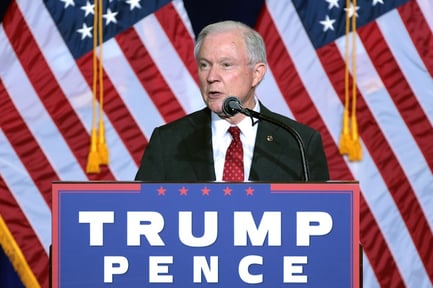 In a three-paragraph memo released on Thursday, U.S. Attorney General Jeff Sessions rescinded several Obama-era directives which since 2013 had discouraged enforcement of federal marijuana laws in states which had legalized cannabis.

Sessions encouraged federal prosecutors to use their own discretion — given the department’s limited resources, the seriousness of the crime, and the deterrent effect which would expectedly result — in weighing whether charges were appropriate.

The move will likely stir confusion about whether it is OK to grow, buy, or use cannabis in states where it has been legalized and marketed. It comes three days after adult-use shops opened for business in California, which is poised to become the world’s largest recreational cannabis market despite long-standing federal law prohibiting it.

On a day that a “bomb cyclone” snowstorm dumped along the East Coast, the announcement likewise had a chilling effect on stocks nationwide. Several of the largest cannabis growers and other industry-related stocks took a hit in Thursday trading, effectively wiping out the gains enjoyed earlier in the week as California’s full legalization of its adult-use market unfolded.

“The immediate impact of Attorney General Session’s decision to rescind the Cole Memo will be felt most acutely in the public markets, where some companies have already lost 30% or more of their stock value since the announcement was made this morning, said New Frontier Data CEO Giadha Aguirre De Carcer. “Overall, publicly traded cannabis companies are down about 15% since this news broke.”

Though Sessions has been a longtime, staunch opponent of cannabis, polls consistently show that a solid majority of Americans believe that the drug should be legal, especially for medical use.

Responses from policymakers and industry officials were swift and sharp.

Senator Cory Gardner (R-Colo.) tweeted that “this reported action directly contradicts what Attorney General Sessions told me prior to his confirmation. With no prior notice to Congress, the Justice Department has trampled on the will of the voters in CO and other states.”

“While the rescinding of the Cole Memo is significant as it highlights the Trump administration’s opposition to legal cannabis, it is unlikely to be significantly disruptive to the industry in the immediate term,” said John Kagia, New Frontier Data’s executive VP of industry analytics. “The key question is what approach the DOJ will take to enforcing the law once the memo is rescinded, and it remains to be seen whether the agency has the political support to aggressively intervene in legal states.”

During a Thursday press conference at the White House, Press Secretary Sarah Huckabee Sanders said that the decision simply reflected the administration’s desire to uphold federal laws, especially against “large-scale distributors,” but she did not elaborate.